When we choose to walk the path of holiness rather than the road of mediocrity, we will have all we need to walk that path.

“Just keep going. This will all be worth the effort” I was told as I ran through the hills behind my base. I was in the US Marine Corps at the time and I was running with a friend in what was termed “The Hills” behind my base in California. These hills were steep – both going up and going down – and seemingly took forever to run through.

When we finished our run, I was shown my reward: a job well done. It was strangely satisfying. I had ran with Sgt. Ski and followed the directives of my Commanding Officer to continue to train and be in top physical shape. Though running “The Hills” were difficult, it was well worth it. My CO provided the command. Sgt. Ski ran with me, encouraging me  to continue.

In my final article in this series and in Genesis 22, we see how God provided for Abraham. Let’s take a look and discover the way God provides for us as we walk on the path less traveled.

Then Abraham raised his eyes and looked, and behold, behind him a ram caught in the thicket by his horns; and Abraham went and took the ram and offered him up for a burnt offering in the place of his son. Abraham called the name of that place The Lord Will Provide, as it is said to this day, “In the mount of the Lord it will be provided.”                 – Genesis 22:13-14 NASB

Remember when Abraham and Isaac were trekking up the mountain? Do you remember Issac asking his father where the lamb for the sacrifice was? Issac saw the wood, saw the fire but didn’t see the lamb needed for the sacrifice. Abraham responded that God Himself would provide the lamb.

Understanding what Abraham was thinking – or at least trying to understand – is not productive. Was he thinking that the sacrifice would be his son Isaac? Did Abraham think God would make a substitute available? We simply don’t know because the text doesn’t go any further on Abraham’s comment. And that is a good thing.

What is interesting is that Abraham’s expectation was for a lamb. 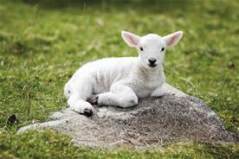 for lamb, seh, means a young sheep, or young lamb. The picture to the right is a very good representation of what Abraham expected God to provide.

The Hebrew word used for the ram here is the word ‘ayil. When you see that word think of one of those big-horned sheep. This wasn’t some little thing this was B-I-G BIG! 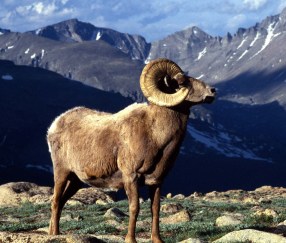 Do you see the difference? The size of the sacrifice that Abraham expected and what God delivered could not be more different. God provided much more than Abraham imagined He would.

The Expected Sacrifice Made

So Abraham made the sacrifice he expected to make. The only difference was the subject of the sacrifice. Abraham – by all indications – expected to sacrifice his son but perhaps was hoping for a lamb instead, followed God’s instructions to the letter. God had a different idea. God supplied much more than Abraham needed for the sacrifice that God demanded. God was much more generous to Abraham (and Isaac) than either could have imagined. Hmmm.

Abraham made the sacrifice.He killed the ram provided by God. He named that place “The Lord will provide.” Remember that God sent Abraham to the mountain of Moriah. We saw that in v. 2. The word Moriah is a Hebrew participle meaning the place of seeing. The idea that we glean from that in this context is where God sees, God provides. So Abraham named that spot as the place where God saw and provided.

Where are you on this path less traveled? Where are you in the pursuit of holiness? Are you at a point of appointed sacrifice?

Our walk on this path of holiness is built on nothing less than God’s provision. Regardless of what form it take, it is from God and we should expect that it will be more than enough for us to finish the task God has called us to complete.